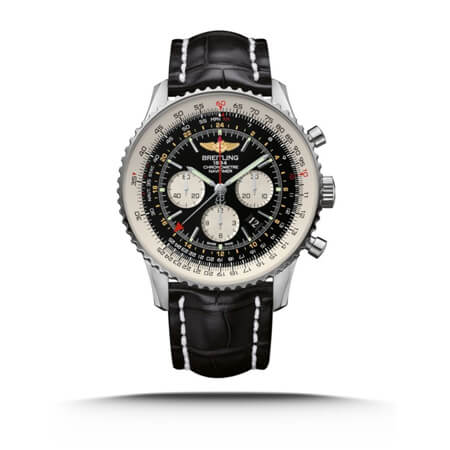 Breitling—for pilots and other adventure lovers

Anyone who has ever set foot on the Edwards Air Force Base near Lancaster in California, or on a US aircraft can definitely bear witness: Breitling watches on the wrists of the pilots. The connection between the Swiss watch manufacturer and the pilots is not just a historical footnote or a series of a model inspired by the retro design. The brand has won the favor of pilots over the decades thanks to its robust and functional watches, just like pilots love it.
Breitling began the construction of onboard chronographs for the Royal Air Force airplanes in the late 1930s. After the Second World War, the company manufactured instrument panels for Boeing, Lockheed, and Douglas. The first pilot wristwatch was developed in the 1940s and quickly went on to become one of the must-haves of the pilots.
In 1942, Breitling published the “Chronomat”, a pioneering combination of a chronograph that had a start-stop function and a round slide rule. The slide rule enabled pilots to calculate the flight time, speed, distance, and fuel consumption.

Ten years later, the company released the Navitimer, a chronograph with a black dial. The name, which was derived from “Navigation” and “Timer”, was meant to remind pilots that they could rely on the watch, even in difficult situations. The Navitimer was the first ever flight computer clock and is now one of the most iconic Breitling watches.

In 1995, Breitling introduced Emergency, a quartz-controlled pilot watch that quickly became one of the most popular watches of this brand. The watch is equipped with a micro-sender that transmits signals to the international emergency frequency (121.5 MHz) in case of an “emergency”. Since 2013, the signal is now redirected to the digital frequency 406 MHz.

In addition to these historical watches, Breitling also manufactures a series of functional luxury watches that are very popular with pilots, astronauts, divers, and other adventure lovers all over the world.

Send us a simple details about your watch.

We offer market-oriented and fair prices.

Your luxury watch is picked up for free at the location of your choice.

After examination of the watch, the amount of money is transferred within shortest time.

Join the community to be update firstly

Sinup for our new letter and promotion